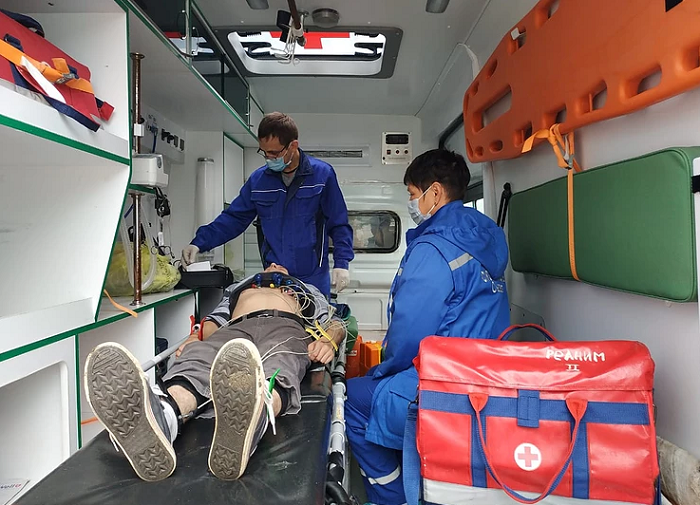 Ural State Medical University will begin training of EMS doctors in residency. The university received a statement from the Federal Service for Supervision in Education and Science, which made a positive decision on licensing the relevant educational activities at USMU.

“Currently, an additional supplement to the current license for educational activities is being prepared. Specialty 08.31.48 Emergency medical care will be included in the general list of residency programs for which training is carried out at the Ural State Medical University,” said Larisa Levchuk, head of the office of postgraduate training at Ural State Medical University.

USMU senior students often start working in the ambulance service while studying at the university – there they get a unique hands on experience. For example, a sixth-year student Roman Aristov has been working for more than a year as a nurse as part of a mobile paramedic brigade. He noted that the load on the EMS had increased in May and remains stably high – about three thousand calls per day in Yekaterinburg.

“The calls are completely different – this is what I like about the ambulance, that there is no routine. Fever patients are often found since May. Basically, the challenges are such that it is difficult to predict what you will eventually face. There are heart patients, asthmatics, patients with COPD, injuries,” said Roman Aristov.

Working in an ambulance is definitely hard, the student says. Especially now. If earlier on the shift it was possible to allocate an hour for rest when there are no calls, now you can forget about it: you have to work 24 hours without any breaks. But there are also positive factors – in particular, Roman admits that he was very lucky with the team.

“I know students from our faculty who want to stay in the ambulance after graduation. Doctors in my environment very often say that “young blood” has not come for a long time – there is a shortage of personnel, this is absolutely certain. Ambulance residency is something that should have always been, and the fact that it will appear in our university is a huge plus,” Roman Aristov shared his opinion.

Now medical calls to the ambulance are often served by paramedic teams, and the look of a doctor in some difficult cases is not enough, said Roman Orlov, a sixth-year student of the USMU:

“Sometimes we have to face challenges that require a true medical approach with clinical thinking and a deep understanding of the problem, which is what we are taught at the university. Very often there are severe patients with multiple competing pathologies. Sometimes it is difficult for a paramedic to understand, and a doctor who understands the situation more deeply is needed. “

Roman Orlov noted that he was waiting for the moment when a residency in the specialty “Emergency Medical Care” would appear. In his opinion, this will make it possible to replenish the ranks of EMS doctors – to train highly qualified specialists with knowledge and skills in several areas of medicine at once.