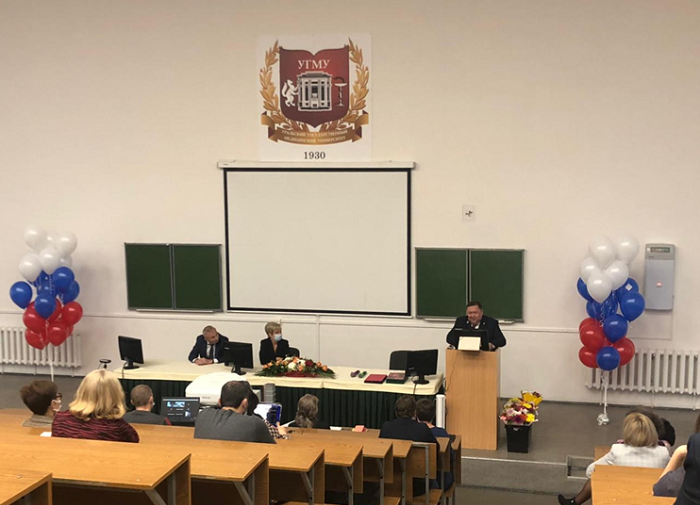 A solemn meeting of the Academic Council of the Faculty of Dentistry of USMU, dedicated to the 45th anniversary of its foundation, was held On November 12, 2021 in the Big Auditorium of the main building of Ural Medical University.

The academic council was attended by members of the council, invited teachers, an asset of the NOMUS of the Faculty of Dentistry. The guests were the rector of the university, Honored Doctor of Russia, Corresponding Member of the Russian Academy of Sciences, Professor Olga Petrovna Kovtun, representative of employers – President of the Regional Dental Association of the Sverdlovsk Region, Vice President of the Dental Association of Russia, Chief Freelance Dentist of the Ministry of Health of SB, Head of ANO STOMATOLOGIYA Yekaterinburg – Honored Doctor of Russia Aleksey Vitalievich Portnyagin, graduate of 1981 (1st issue) Chief dentist of the Ural Federal District, chief physician of the Regional Dental Clinic, Professor of the Department of Prosthetic Dentistry and General Dentistry, Honored Doctor of Russia, Doctor of Medical Sciences, Professor Marina Pavlovna Kharitonova, graduate of 1982 (2nd edition) Chief physician of branch No. 4, Chief freelance specialist, pediatric dentist of the Ural Federal District, Excellence in Healthcare of Russia Lyudmila Ivanovna Vorozhtsova, deans of all faculties of USMU. In a remote format, teachers of the departments of the Faculty of Dentistry, as well as guests – deans of the Faculty of Dentistry from the universities of Chelyabinsk and Tyumen were connected to the Academic Council.

Rector of USMU Olga Kovtun warmly welcomed the participants of the meeting and all teachers, students of the Faculty of Dentistry of USMU, noted the main achievements and successes, as well as the tasks facing the faculty and students of the faculty. The rector presented certificates and letters of thanks to 8 employees in honor of the celebration of the 90th anniversary of the Ural State Medical University and the 45th anniversary of the Federation Council.

The Dental Faculty was congratulated by employers represented by Portnyagin A.V., Kharitonova M.P., Vorozhtsova L.I., all of them were graduates of the faculty in 1981-1982. Congratulatory addresses were presented from the President of the Russian Dental Association (StAR) – Doctor of Medical Sciences, Professor A.I. Yaremenko, the Regional Dental Association of the Sverdlovsk Region. As recognition of the merits of the teaching staff of the faculty was the fact that the names of 28 employees – teachers, nominated for StAR awards at various levels – were named.

The Dean of the Federation Council – Honored Doctor of Russia, Doctor of Medical Sciences, Professor Sergei Yegorovich Zholudev made a report on the history, current state and development prospects of the Faculty of Dentistry for the period up to 2030. (1983 graduate). The significant role of the dental clinic of the faculty and the scientific school of dentistry, the founders of which are professors Malchikova L.P., Bulatovskaya B.Ya., Ron G.I.

Deans of all faculties of USMU made welcoming speeches at the faculty holiday.

As on any birthday – there were some surprises here – this is a small, but very optimistic and perky concert program!

Despite the limited number of participants, the celebration of the Faculty of Dentistry was held with a positive attitude.

I would like to wish the dental faculty of USMU further success in its development! 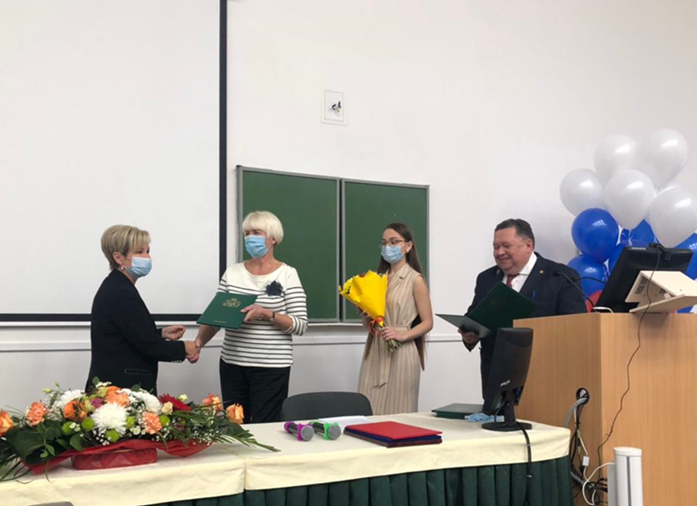