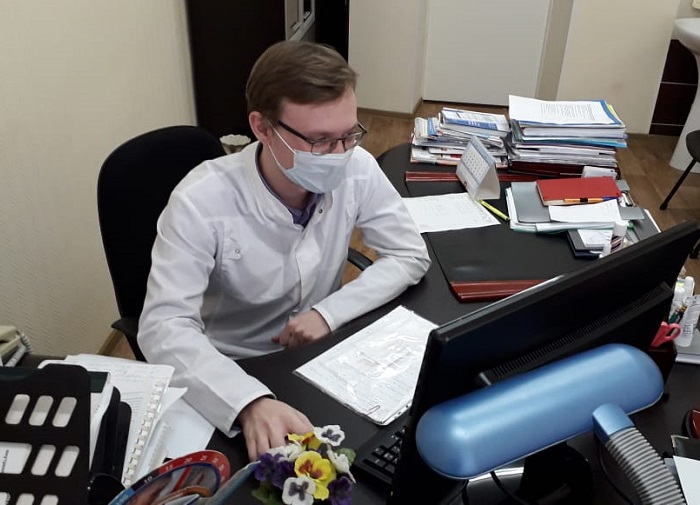 Over 2,2 thousand of students, residents and lecturers of the Ural State Medical University (USMU) today participate in providing medical care to residents of the Sverdlovsk region. In the context of the fight against the new coronavirus infection, one of the most demanded specialists are pulmonologists, whose training is conducted in the residency of USMU.

Viktor Evdokimov is 24, next year the young man will become a certified pulmonologist. Until the sixth year, Victor could not make the final choice of his future specialty and “tossed” between gastroenterology and pulmonology, but in the end he decided to devote himself to the second direction:

“Moreover, it was not about some rational considerations, but rather a choice between, if not idols, then something close to this: doctors Sergei Vyalov (gastroenterologist) and Sergei Avdeev (pulmonologist). Their competence, professionalism amazed me, I wanted to be like them! And I hope that I am starting to slowly, little by little, become that way. “

During his studies, Viktor Evdokimov considers the practice at City Clinical Hospital # 33 in Yekaterinburg to be the most useful. According to the resident, there he met specialists who can be called doctors with a capital letter. So, with Igor Leshchenko, chief pulmonologist of Yekaterinburg and the Sverdlovsk region, Viktor discussed the use of genetically engineered drugs in patients with bronchial asthma, methods of diagnosis and treatment of idiopathic pulmonary fibrosis. With the pulmonologist Alexei Krivonogov, the future doctor gained experience in managing patients with severe bronchial asthma, an extremely severe course of chronic obstructive pulmonary disease (COPD).

Since October, Viktor Evdokimov had been working in the therapeutic department of the medical unit No. 121 in his small hometown of Nizhnyaya Salda. In November the department was focused on treating patients with COVID-19. In total, it is designed for 30 beds, but they are not empty as there are many patients in the city. Victor’s working day consists of two halves – work in the “red” and “clean” zones.

“There are many patients with concomitant pathology – with the same bronchial asthma and COPD. As a pulmonologist, I try to take such patients into “my” wards, together with the treatment of the underlying disease, I check the correct use of inhalers, inhalation technique and many other details for which the district physicians often do not physically have time to see them,” said Viktor Evdokimov.

The resident admits that he feels the difference between independent work and educational practice: now he perceives patients as “his own”, the same concerns the problems that disturb them – this is a completely different measure of responsibility.

“Experience itself is an irreplaceable thing that no money can buy. Only work at the patient’s bedside, reading and reflecting on what has been read can make yesterday’s student a competent, self-confident specialist,” says Viktor Evdokimov.